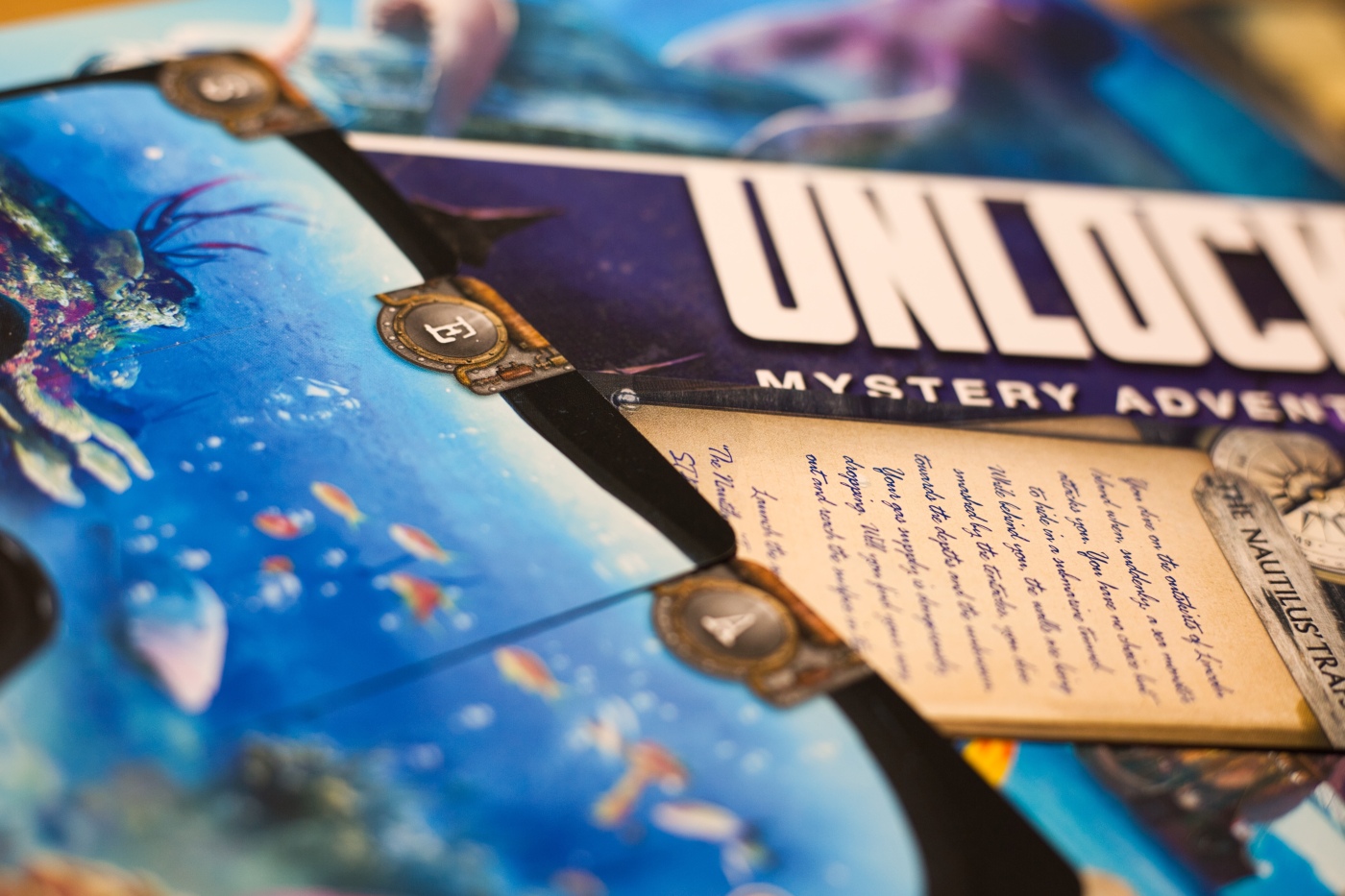 The Nautilus’ Traps is the second game in the Unlock! Mystery Adventures box, which in itself is the second in the series of Unlock! boxes. It’s the fifth Unlock! game we’ve played in fairly quick succession. We attempted to ‘sneak’ in a quick game before a family zoom call, but as with all best laid plans, we did have to push back the call a few minutes (though maybe we can blame dinner taking longer to cook than planned.)

You dive on the outskirts of Lincoln Island when, suddenly, a sea monster attacks you. You have no choice but to hide in a submarine tunnel. While behind you, the walls are being smashed by the tentacles, you dive towards the depths and the unknown. Your gas supply is dangerously dropping. Will you find your way out and reach the surface on time?

So, you’re just chilling and scuba diving, apparently on your own (why would you dive solo?) when you get attacked by a Kraken, at least I’m going with a Kraken from the artwork, when you find a mysterious sunken submarine to hide in, and you have dangerously low air!

You start off with 20 minutes worth of air, so to get yourself through the game, you need to find more air tanks as you go through, this is a different way of approaching a game which I quite liked, there was certainly a couple of occasions I was saying that we desperately needed more air! It might be that being a keen scuba diver myself this is an absolutely nope scenario, and the thought of running out of air is genuinely terrifying! The need to find new sources of air throughout the game I felt helped bring the story through the game, and not just a set up to give you an objective at the start. It also gave a more consistent feeling of being under pressure throughout the game, the panic of running out of time wasn’t saved for the end, but you get multiple doses of it. There were a few points where baring the story in mind helped us make some smart choices in what we decided to do.

There were a few points where there was a lot of information available which made it more difficult. You could easily get access to lots of areas at once and for us we using too many things from different areas to try and solve puzzles, either because the artwork was very similar on some of the cards, or because at points we had a lot of cards in front of us. Because of the amount of information available, we found we weren’t examining locations cards as closely as we should have been which led to a (minor?) out of air situation at one point where we didn’t spot an air bottle we needed (we did find it eventually, though I’m not sure how it works when you go into the red and then 5 minutes later find more air and just carry on anyway.)

Given the nature of the game there were a lot of different areas to explore. I liked having so many places available the whole time, but at the same time it got a bit confusing (see above.) There were also some of the cards which are red herrings, and there is even one point when you get penalised for taking an indicated card, which felt like a bit of a cheap shot! We got caught with quite a few penalties trying to use cards as clues to a puzzle when they were unrelated which certainly didn’t help our time or air supply. Compared to other games by Unlock! this game featured very few puzzles where combining objects was required, there was a lot more puzzles which needed solving to produce codes, and we were lucky enough to get a ‘machine’ which gave some variety.

We escaped in 62:23 of which 18 minutes were penalties (2 penalty cards and 6 incorrect codes), we took 4 hints thought the game, which gave us a 4/5 star score in the unlock! app. This is a game that I feel could benefit from more than 2 people. Unlock! on the box suggest 1-6 players, I think 1 player would struggle to get through all the information to escape in time, but with 6 people you’re probably not going to have very much each to do. I think for this game 3 people would be optimal. The Nautilus’ Trap is self rated as 2/3 by Unlock! I would put it down the middle of the difficulty scale, I don’t think many of the puzzles were difficult, it was the amount of information available to us did put in some red herrings. I do really like the fact that Unlock! games are lendable (you can’t replay them yourself as with most escape games) but it feels like better value for money when you can lend them to friends and family to play.

Overall I’m giving Nautilus’ Trap 3/5, I would say it was very comparable to house on the hill, it is a fun evening activity for the crazy times we live in. And if playing this game, inspires you to take up scuba diving when there is some normality back in the world, then don’t follow this story’s example of diving solo and with Krakens and trying to navigate through submarine wrecks, get yourself to a proper dive school, dive to your training, and always with a buddy.

2 thoughts on “Unlock! – The Nautilus’ Traps”