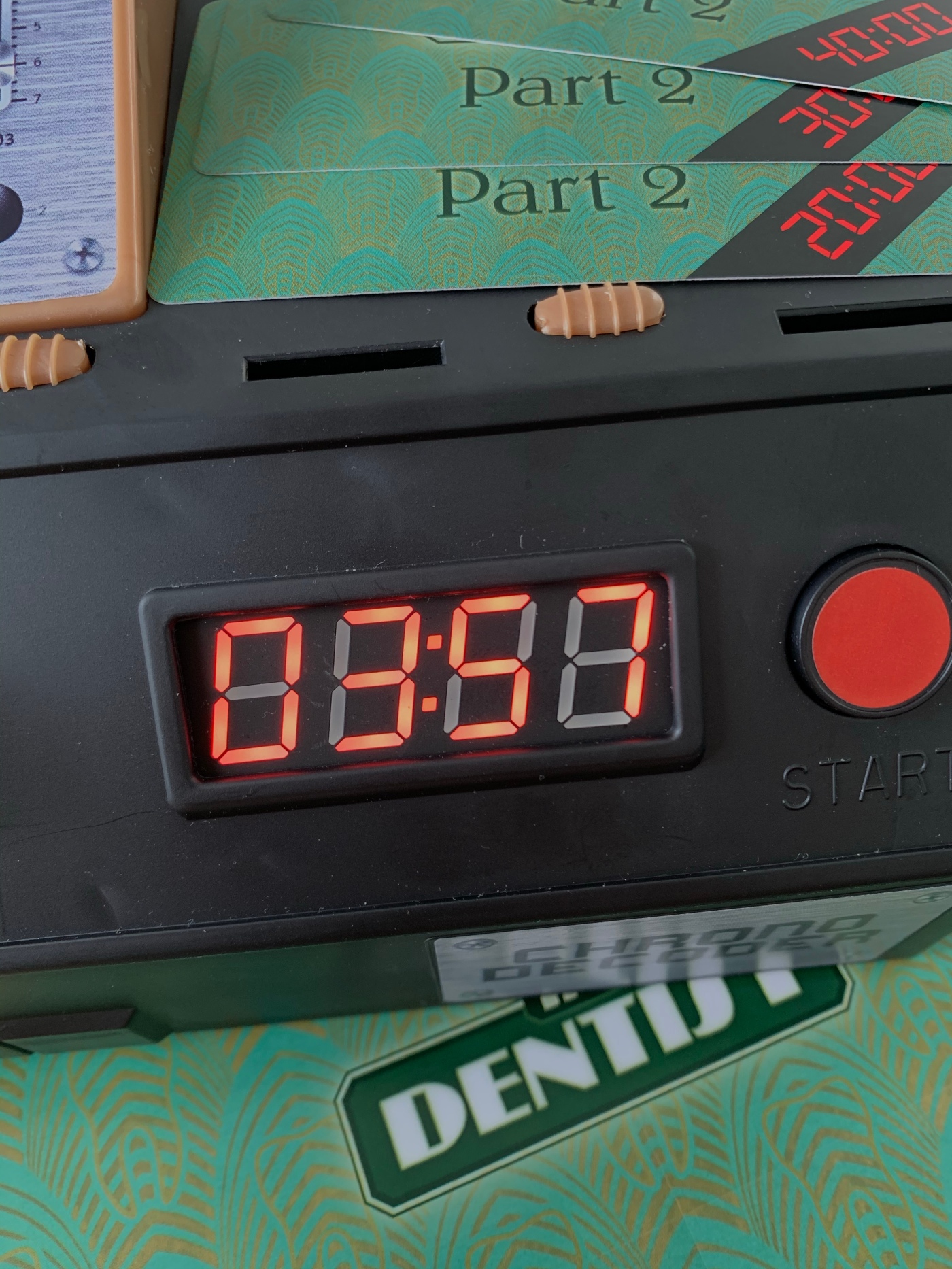 The Dentist is the second expansion pack we picked up for Escape Room The Game, we’ve had our decoder lent out for a little while for friends to play, and having it back we decided to utilise a day off work to play a game. You need the chrono decoder, keys and hint decoder from the base pack to play.

Dr Sienski, your dentist, has called you in for your annual check-up. With a bit of reluctance, you keep your appointment and end up in his chair. Before you know it, he places an anaesthetic mask over your face. The last thing you hear is Dr Sienski’s voice telling you that he is going to sedate you with laughing gas so that you will not feel any pain when he extracts your molar. Then everything goes black.

As if a trip to the dentist wasn’t scary enough, we know have to deal with psychopath dentists experimenting on us?!

The game is in three parts, with three codes to be found to input into the chrono decoder. Each part is one puzzle with different parts to find the code you need for the lock in question. Having failed on Space Station to re-read the base set rules we gave them a quick scan over to make sure we remembered some of the finer points in how these games work.

The first part of the game didn’t take us too long to complete once we had properly looked at the available material and pieced it all together. There is not anything complicated in this part, and feels like a good warm up to the rest of the game. The second part for us was the trickiest, there is useful information hidden in plain sight, and more useful information hidden in the haystack as it were. It took us a while to clock onto how all the parts fitted together and even then we had to work this puzzle quite hard. This was were most of our time was spent in the game, with a couple of incorrect code guesses thrown in which lost us 2 minutes in penalties (I had forgotten about that one, though as least it is not as harsh generally as Unlock! can be.) We ended up using all three hint cards for the second part of the game to aid us as we hadn’t quite clicked onto some key bits of information correctly. Don’t discard everything from the previous parts as these games carry items over to use on multiple occasions. This is a game where playing as a pair we had parts of puzzles we could look at individually and parts we really needed to put our heads together to work through. The last part of the game had some new ways to look at the keys for the chrono decoder which could take a while to catch onto.

I do like the Escape Room the Game’s as an at home option, I’ve mentioned previously about the positives of being able to replenish the game to be able to lend out. The games are good value for money. Like Space Station, this game suggests 3-5 players, 4/5 my be too many in my opinion, we played this game happily with two of us and still escaped. We escaped with 03:57 left on the clock (after the two minutes of deductions) the game self rates as a 4/5 difficulty I’m not sure I agree with it being that tough, but as previously mentioned I’m not sure at what point I would award a 5/5 for difficulty. I did feel like there was less variety within this game than some others, but that does come as a limitation of having 3 big puzzles to the game.

Overall I’m awarding 3.5/5 stars, which for an at home game is a strong score!